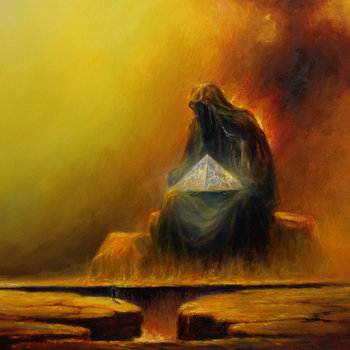 From A.L.N.:
""Cairn" clocks in at just under one hour of new original music. I recorded the album over the course of three months in my home studio. I took the long way, sparing no expense or detail in my recording. I sought to take the project to a new territory tonally, starting with my education. I won't get into too much detail lest I bore the majority of you, so I will leave it simple: this is the highest resolution recording of the most thoroughly written and rehearsed Mizmor material there's ever been. I was purposefully the pickiest I've ever been with myself at all stages of this album's production and coming through the other side, I'm extremely happy with the result. I'm incredibly honored and thrilled to again have worked with Sonny DiPerri and Adam Gonsalves). Together, the three of us crafted the sound of "Yodh" and have now taken "Cairn" well beyond the prior's sonic limits. I am also floored by the final product of the extremely personal commissioned painting by Mariusz Lewandowski. Continuing in the vein of the polish surrealist master, Beksinski, Lewandowski has beautifully interpreted the theme's of "Cairn" into his painting "Time Immemorial," which sprawls to grace both covers of the album."
releases September 6, 2019